MISNA was organized by the Marine Exchanges of Los Angeles/Long Beach, San Francisco, Portland, Seattle, and Vancouver, B.C., and is continuing to expand its coverage. Its purpose is the gathering and dissemination of shipping information.

MISNA established a common protocol and members share data daily with each other so that all standard information is available electronically from any one of the participating MISNA members. The ultimate objective is to make maritime information available to more people through a simple data exchange. MISNA’s growth will lead to the availability of this information through the Internet and similar networks.

Some of the products and services MISNA provides to its clients, governmental entities, and the interested public are:

MISNA members are continually exploring their capability to enhance their maritime information services.

MISNA is currently comprised of the following organizations:

For more information please contact your local MISNA member. You can reach the Marine Exchange of the San Francisco Bay Region at (415) 441-6600 or Email: misna@sfmx.org

December 18, 2001
WASHINGTON, DC — Maritime Information Service of North America, Inc. announced today that it had entered into an agreement with the Office of Naval Intelligence to provide seven-day advance information of U.S. bound ship traffic. The Navy approached the group immediately following the September 11 terrorist attacks. “In areas of seaport information, it became apparent very early after the events of September 11 that maritime associations are the best resource for critical vessel information,” said Robert T. Bohlman, MISNA president.

MISNA is a non-profit organization dedicated to facilitating the flow and utility of maritime information and commerce and is comprised of maritime associations at 10 major U.S. seaport communities as well as in Vancouver, BC. Member maritime associations represent all segments of the maritime industry and waterfront related businesses, such as steamship agents, owners, and operators; towboat companies; stevedore and terminal operators; Customhouse brokers and freight forwarders; and surveyors, just to name a few.

These companies are responsible for the efficient movement of over 95% of the U.S. imports, or approximately two billion tons of product, which generates $742 billion dollars into the U.S. gross domestic product and employs 13 million people in the United States.

“We are extremely excited about the opportunities provided by this arrangement with MISNA,” said the Navy project officer. “In terms of our overall data gathering and analysis needs, MISNA can save the government countless hours and eliminate a great deal of redundant effort.”

In existence since 1995, MISNA now tracks and records the movements of over 65% of the approximate 75,000 U.S. ship calls each year. As one of its first programs, MISNA collected real-time ship movement information from each of the five founding west coast member port communities and developed a centralized information database. “Interest in MISNA has grown tremendously over the last several years,” Bohlman said, citing the fact that MISNA membership has doubled since 1995. “In addition to building the membership base, our constituencies in both the private and public sectors have recognized that having timely, accurate access to this information is critical to our nation’s ability to not only remain competitive in the increasingly complex global marketplace but also to protect and enhance our seaport security.” The agreement between the Navy and MISNA reflects this growing need and represents a one-of-a kind private public partnership.

Bohlman said the group will work to continue to expand its membership as well as seek to provide additional services to the commercial maritime transportation system users. “Now more than at any time in the history of international shipping, instantaneous access to accurate information is as important to our maritime infrastructure as are cranes and warehouses. MISNA stands ready to meet the challenges of the 21st century,” Bohlman said.

The method for supporting multiple voyages is not to support voyages at all from the MISNA perspective. MISNA is a multiport systme and has nothing to do with a Voyage. Voyage is a local exchange or operator designation for the transit of a vessel from an arbitrary start to an arbitrary end. In this, it is the responsibility of the local exchange, agent or operator to support various voyage identifiers.

The major issue is related to the nomenclature of how we identify elements associated with the transits and calls of the vessles. We can then attach these references to local tables, built and maintained by the local exchange, to support the local customs of the user population.

The above diagram represents a method of generating a transit and call history that is flexible and voyage independant. It allows for the acknowledgement of a vessels passage across significant points, used in many harbors as voyage locations If further allows for a database structure that can apply local table sets to the Vessel, Berth, Call and Transit records (not illustrated). The system does away with “explicit” linkages that use key contextual data (such as location and date to identify a transit to a port). Rather it uses an abstracted linkage that allows fot any transit to be attached to any call. In this way a the record ID is stored in recipicol links between the Transit and CallLocation fields. This association allows for the vessels to have a linked voyage history that can handle estimated as well as actual movements with great ease, as well as handling inserted or dropped Calls without having to re-asses the complete list.

The system creates a differentiation between when a vessel is moving and when it is not. It allows for real-time data to be attached to a transit record and cargos to be attached to call locations. It allows you to access all calls and transits from either the vessel or berth/port perspective. Since ETD’s and ETA’s are attaced to the transit record, the data is very flexible in terms of the logic associated with deriving reports. This is especially true for inport or due to sail type reports.

A local exchanges data can be attached to the data by creating an intermediary table that manages linkages to augmented data. This would be the attachement of a relationship to the transit, call, vessel or port/berth tables to the local tables. This could further be defined with a local port identifier code that would attach the proper subfile automatically. The identifier code would allow a configuration file to identify the tables associated with the local usage of the MISNA data. Another way to link would be to store the MISNA record identifiers for calls and transitis in the local file set. A third option would be to allow for Voyage numbers on the MISNA tables by creating a Voyage Number table that attached Voyage Numbers by originator onto each of the Call and Transit records (voyageID, originatorID). In this way an unlimited number of voyage identifiers could be attached to a Vessels transit. Any or all of these methods could be utilized to maintain local data. 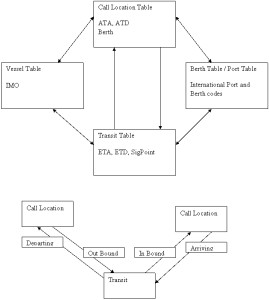