I Will Not Abandon You 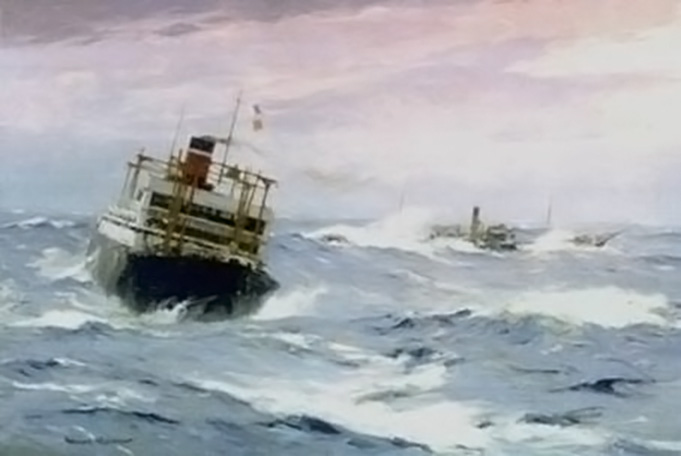 Painting by Norman Wilkinson, c.1926 – About the Artist (Wikipedia)

U.S. Liner “PRESIDENT ROOSEVELT” standing by British steamship “ANTINOE”, 24th – 28th January 1926, North Atlantic Latitude 47.50 North, Longitude 36.00 West. Extract from Lloyds Register (31st March 1926): “The Court also wish to record their deep appreciation of the efforts of Captain Fried and Crew of the Steamship ‘President Roosevelt’ which resulted in the saving of all aboard the Steamship ‘Antinoe’.”

The 18″ x 25″ Lithograph of the painting is available for purchase from the Marine Exchange for $35.00

Memories of Rescuing the Crew of the S.S. Antinoe

By: John Hahn – Fireman on the S.S. President Roosevelt

I Will Not Abandon You

At noon on Wednesday, 20 January 1926, the SS PRESIDENT ROOSEVELT of the United States Lines backed into the Hudson River from her pier in Hoboken, New Jersey, and set forth on a routine passage to Bremerhaven, Germany. She was commanded by the late George Fried. En route she was scheduled to make short passenger and mail stops at English Channel ports. Besides a large cargo destined for Germany, the PRESIDENT ROOSEVELT carried about 200 passengers and several thousand bags of U.S. mail.

The PRESIDENT ROOSEVELT dropped her pilot near Ambrose Lightship at 2 o’clock that afternoon. Her course was then set toward Nantucket Lightship, 200 miles to the east. Even before the pilot had departed, dirty weather set in. The ship’s barometer was erratic, black clouds were scudding by overhead, a strong wind was blowing in from the northeast, and a choppy cross-sea was running. Captain Fried did not realize, of course, that he was heading directly into one of the worst storms ever to be recorded on the North Atlantic, as far as violence and duration were concerned. Conditions grew worse as the voyage progressed. The PRESIDENT ROOSEVELT was laboring heavily but it had not yet become necessary to slow her engines. The ship was battened down throughout for heavy weather, passengers were forbidden on the open decks, lifelines were strung out in the passenger areas, and meals were served on wet tablecloths.

During the afternoon of the third day, speed was reduced. Throughout the night, circumstances remained unchanged. Under Captain Fried’s expert handling, the PRESIDENT ROOSEVELT was weathering the storm nicely. Only the routine watches were maintained. In normal manner the watches changed at 4:00 a.m. on Sunday morning and Kenneth Upton assumed his vigil in the PRESIDENT ROOSEVELT’S radio room. One hour and forty minutes later, 5:40 a.m., his sensitive earphones picked up a pleading distress call.

The message was from the disabled British freighter, ANTINOE. The ANTINOE was able to give only a dead reckoning position, as for several days they has seen neither sun nor stars from which to work out an accurate position fix. Captain Fried was notified immediately. With the aid of his and other radio direction finders, he obtained an accurate fix on the ANTINOE as she continued to transmit messages of her plight.

Fighting through heavy seas, the PRESIDENT ROOSEVELT finally reached the ANTINOE’S side, six and one half-hours later. The freighter had developed a severe starboard list, and the seas had battered her lifeboats to splinters. She appeared helpless and completely at the mercy of the elements. Nevertheless, Captain Fried received a message from Captain Tose of the ANTINOE stating that he thought that his ship could be saved. He requested that the PRESIDENT ROOSEVELT attempt to get a line across to ANTINOE for towing purposes. Captain Fried agreed, and ordered the two International Code signal flags, “A over I”, run up the signal halyard to the port yardarm indicating that he would stand by to assist.

Several attempts to put a line on the ANTINOE ended in failure. As darkness set in, the ANTINOE received a staggering blow that eliminated any chance of saving her. It stove in her decks, flooded her engines and boilers, and left her without light, power or heat. Later that evening snow had added to the already trying conditions. Increasing in intensity, the snow reached blizzard proportions before midnight. The PRESIDENT ROOSEVELT’S powerful searchlights lost their focus on the sinking ship. Now the possibility of a drifting collision added to Captain Fried’s anxiety.

It was not until 18 1/2 hours later that the searching eyes on the PRESIDENT ROOSEVELT’S bridge caught their next glimpse of the foundering ship. The ANTINOE was now on her beam-ends slowly settling by the stern. It was obvious that she could not last much longer. No time could be lost in evacuating her crew. Faced with this critical condition and knowing that the ANTINOE had no lifeboats, Captain Fried called for volunteers. From these volunteers, Chief Officer Miller picked his crew of eight oarsmen. The lifeboat was prepared and swung over the PRESIDENT ROOSEVELT’S side still in davits. All unnecessary equipment had been removed. The liner was then maneuvered so that the lifeboat would be on her lee side in order to afford it as much protection as possible from the towering hull. Gradually the lifeboat, with the oarsmen at their places and the Chief Officer at the tillet, was lowered until it was just above the water. At the precise moment when a wave had reached its crest on the ship’s side, the rope falls were released in the hope that as the wave fell away from the ship it would carry the lifeboat safely with it.

Instead, the wave picked up the lifeboat and flattened it against the PRESIDENT ROOSEVELT’S side. Only by quick the action of the men on deck were seven of the lifeboat crew hauled back to safety. Two men perished in the sea. The others changed into dry clothing and returned to await further orders. By now night had again set in with no indication of the weather abating. Captain Fried knew that further attempts to launch a lifeboat at this time were out of the question. The volunteers were dismissed and the ship’s searchlights again took up the vigil.

At daylight rescue operations were resumed. The PRESIDENT ROOSEVELT was maneuvered to a position on the weather side of the ANTINOE. Fuel oil was dumped over the side in the attempt to smooth the intervening seas. A line was finally put on the ANTINOE with the Lyle gun. A heavier line was then run over to the ANTINOE to which an empty lifeboat was fastened, but the rope parted while the lifeboat was on its way. Two more attempts to launch lifeboats likewise ended in failure. Darkness was setting in. In desperation, Captain Fried managed to get an unmanned lifeboat over the side. He hoped that paying out a line while he circled the ANTINOE, the rope would reach the ship and the lifeboat could be hauled alongside. But again, there was failure. With their stricken ship dead in the water and wallowing on her beam-ends, the men on the ANTINOE wondered, as each giant green comber rolled over her, if this would be the death blow.

How long could she take an unmerciful beating? Their only hope an comfort during those long hours were the two little signal flags, “A over I”, whipping in the gale from the PRESIDENT ROOSEVELT’S yardarm. As the hours stretched into days, they wondered, too, of the PRESIDENT ROOSEVELT’S fuel supply would hold out or if she would be compelled to go on without them. They could also see that she was a large passenger liner and, no doubt, had mail on board. Obviously she would have a rigid schedule to maintain. Yet the mercy ship doggedly hung on.

Meanwhile Captain Fried had radioed his owners in New York that he intended to stand by until the rescue was completed or the ship sank. Those on board could not know that his messages had made known the ANTINOE’S plight and all over the world prayers were being offered for their safety and rescue.

The weather moderated slightly the next day and it was decided to attempt another launching. The volunteers were requested to stand by. The PRESIDENT ROOSEVELT was again maneuvered into position. The lifeboat was lowered. At the precise moment the rope falls were released and the oars bent until they were bowed. It was touch and go for a breathtaking moment, but this time they made it, and while their shipmates cheered, they inched their way toward the ANTINOE, moving in under the lee bow. Captain Tose had decided that, with the exception of himself, married men would be the first evacuated. These men jumped and were pulled to safety by those in the lifeboat. With half the ANTINOE’S crew aboard, the lifeboat made her return trip. Expert seamanship and the help of eager hands on deck helped all to reach safety aboard the PRESIDENT ROOSEVELT. The battered lifeboat was cast adrift. Further attempts to reach the stricken ship were impossible at that time.

Shortly after midnight Thursday morning, the wind shifted and the storm suddenly abated. Under a beautiful full moon another lifeboat left the PRESIDENT ROOSEVELT, plucked the remaining men off the ANTINOE and returned without incident. Captain Fried then radioed the results of the rescue to the world. His battle with the elements had lasted 85 hours and 40 minutes and had cost two men’s lives, six lifeboats, and as many tons of fuel. With three mighty blasts from her whistles, as a farewell salute to the doomed ANTINOE whose stern had now completely disappeared beneath the sea, the PRESIDENT ROOSEVELT resumed her voyage to Europe.